Thebananablog
by Murr
on Oktober 2, 2012 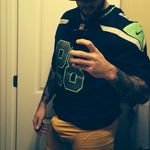 Some of you might recognize this hottie as Coby from MilitaryClassified. He is now Jonah Reeves and just made his Men.

In his first Men. October 4, 3 Comments Categories: Non-Porn. Danny Castillos is a romantic guy with a dirty mind. It's still difficult to accept the giant spiders that also like to crawl dangerously close to the faux flowered meadow I sleep on.

There is a student here who is studying bugs in coffee plants and she intentionally sleeps with her larvae every night, in the hopes that one will bear a fly which she believes are home to another worm.

She was telling the rest of us ACMers that the first time a worm emerged she went around telling everyone "I have worms! All buses stop. My family here tells me that the only thing moving this week is the spoon to stir the palmito soup, which is traditional on Good Friday.

I found myself trying to explain scalloped potatoes the other day to my host mom, and I got so caught up in the salt and pepper details that I forgot to include the milk!

Outside of my research and Spanish classes, food recipes are the third most common item of scholarly debate. I'm hoping to get a little exchange going.

I'll collect the best fresh fruit drink and dessert recipes from my family here, but need readers to leave recipes for me to pass along. Lasagna is quite popular with my family.

I stay for two more weeks in Turrialba, my study site, and then when April turns, all of the other ACM students and I return to San Jose to live with our other host family the final month.

As far as Costa Rica goes, rubber boots and machetes are the most essential tools of any campesino. Naturally I replaced the machete with a camera, pen and notebook.

My bus leaves at am and if I catch it I can make it to an interview by or It is almost lunchtime for most farmers by about and after hacking at grass all morning with a machete the energy is welcomed.

Work until , dinner at Now, I must admit that I don't work quite the same as a farmer. Usually I walk with him or her in the plot and ask questions about practices, and extension services, like soil analysis that reach the farm while trying to write it all down.

For all the visits I've made, the country is beginning to feel more familiar, especially the rural areas. It's easy to love a place that's full of orchids, naturally occurring botanical gardens, cloud covered mountains, and friendly people.

Of course all the nouns generally associated with the city also form part of Costa Rica. Everything I thought, that a first world country has.

I suppose the proper terms are developed and developing states, or so would say an International Relations Professor.

Regardless, what defines the difference between these two types of states is basically infrastructure and economic activity based on resource extraction.

For example, Costa Rica's work force is made mostly of small farmers. In rural places, near to where I am, the roads become more impassible the further one gets away from politicians or major cities this is the theory of one of the producers I worked with.

Resource extraction is certainly the main activity. Whether it be bananas for export or pineapple or coffee, Costa Ricans are well aware of what they take from the soil.

Perhaps who is not aware lives across the sea where the cargo boat is heading. The categorization of countries such, as has been said, perhaps is archaic.

The system has origins in the Cold War--where all NATO countries were considered first world, Russian and Warsaw allies were considered second world, and any country uninvolved was thrown in the third world category for differentiation purposes.

But the terms definitely hold another meaning. First is generally better the second, and so forth. For this reason, when a young north american arrives in the land of magical nature, a little bit of culture shock is to be expected.

I didn't really think that Costa Rica would be shocking, but the number of gray hairs on my head is growing. Though some say this is just wisdom sprouting.

Whatever the case, it's best to stay away from electric fences. For now, I'll try to fight a little more with this mosquito. There is a plant called "Big man" that some say repels mosquitoes for its bitter qualities.

After I tried a leaf, I was left feeling a bit light-headed and my tongue covered with vanilla extract as mosquitoes feasted regardless.

Goodnight to all and best luck, Pura Vida Anna. Posted by Leeanna Shultz at AM 2 comments:. Thursday, March 12, The Equalizer.

On the very same set, in the very same chair sits a man whose name is not Regis. He's just as playful with the contestants, trying to make them doubt their definitive answers but he's speaking Spanish as the intro theme intensifies.

Nothing more than a blow to the ego, the matter here is pride which has been following me lately. A week or so ago I sat in on a city grade school classroom for an hour.

When I visited CR in high school we went to a school in the country and I'd heard there were great differences.

The lesson of the day was in geography. Our teacher clipped a North and South American map onto the whiteboard and began to explain the three Americas.

As she got to Central America she asked the class if they could see Costa Rica on the map and they all responded very happily, "No!

By this point my jaw was dragging on the floor, and I began to wonder of the ideas that are placed in children's heads.

Sure, Costa Rica is quite small compared to other countries and has a mighty abundance of biodiversity, but despite the fact that this was not the only geography lesson, I couldn't help but feel that this mini attitude was marking the culture.

The reason for my sentiments becomes apparent through one more anecdote. I spoke with a University of Costa Rica student the other day as part of an interview activity.

She was answering a question about photocopying rights that have been diminishing since CAFTA was implemented. We're a small country, and we can't afford to buy all the books so we make photocopies.

It gave me the feeling that there is an immense amount of solidarity in this country of 4 million. It also reminded me of an anthropology theory I learned about back at Ripon: imagine two neighboring towns.

Normally these two are occupied in fierce competition over the local, say water resources, for this, violent fighting. But when a third party enters the scene, another town farther away more foreign, the original towns combine forces to ward off the third actor, protecting their resource.

As soon as the third goes away, the two return to their fighting. The moral: it's better to have solidarity sometimes then never?

Perhaps the matter is better understood closer to home. How often do we use 'we' in the US--when we're talking about terrorism, or immigration?

The point is, when there's a we, there's a them which the 'we' has to fight. Bulge Spy Cam. Tuff N Ruff. Creature of Habit.

Register with a social network : Facebook Google. Offline detected You are offline, do you want to try reload the page?

The banana blog - did you know I'm famous ?